You buy a share (currently £85,000.00) in a U.K. Ltd Company whose sole asset is the property and its contents. The company cannot die (which means there are no complicated French Tax Inheritance Tax problems to worry about), so the share belongs to you and your family in perpetuity. This entitles you to 7 weeks sole occupancy, spread throughout the year on a rolling calendar system. Your share can be sold, left in your will, you own a share of the freehold and this is not a timeshare.

Our method of Part Ownership is tried, tested and reassuringly simple. A group of individuals or families own all the shares in a U.K. Ltd Company whose sole asset is the house, contents and grounds.

The company, known as The Castelet Combefa Ltd, owns the property and its freehold and the shareholders, by subscribing for shares, own the company. As the company cannot die (therefore there is no complicated foreign inheritance tax to worry about), the shares and the house are held forever (in perpetuity) for the shareholders or their descendants.

Put simply, the company owns the house and the shareholders own the company.

The current selling price for a share in the co-ownership of the property is £85,000 plus legal fees and expenses.

The year is split into three blocks and each co-owner has seven weeks at the house every year, consisting of a three week block in period B, a two week block in periods A and C. Approximately twice every seven years, co-owners get an eighth week and this will be attached to one of the two week blocks. Each year at the company’s Annual General Meetings in the UK, co-owners elect a Chairman, Secretary and Rota Officer.

The scheme involves the employment of cleaners between visits, a gardener and during the summer season a pool maintenance company. At each A.G.M. co-owners determine a Service Charge for the year to pay for the cost of this work, for utility charges and for any other expenses agreed by the co-owners.

Each co-owner has 1 vote on all matters if a vote is called and a co-owner owns more than 1 share they still have only 1 vote.

The house is furnished as per inventory and each co-owner will have access to a storage container in the garage where they can house their own personal belongings between visits.

Breakdown of expenses (in Euros): 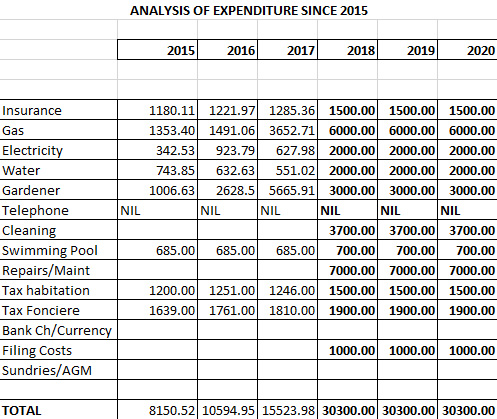